Why are companies Debranding?

In recent years, some of the world’s biggest companies have discarded depth and detail to Debrand Burger King, lost weight.

Rolling Stone found a cleaner edge. VW shared its depth and shadow, as did Kia, Pfizer, Nissan, Durex, Intel, Toyota and a host of other major brands.

Even the munchable hero Julius Pringle had a flattening make under with shaved head dyed mustache, dilated eyes and new. Pre sprung eyebrows.

But what prompted this landslide of logo debranding several interlocking forces are at work. The most immediate of which is the pressure of mobile first design clients used to ask can you make the logo bigger? 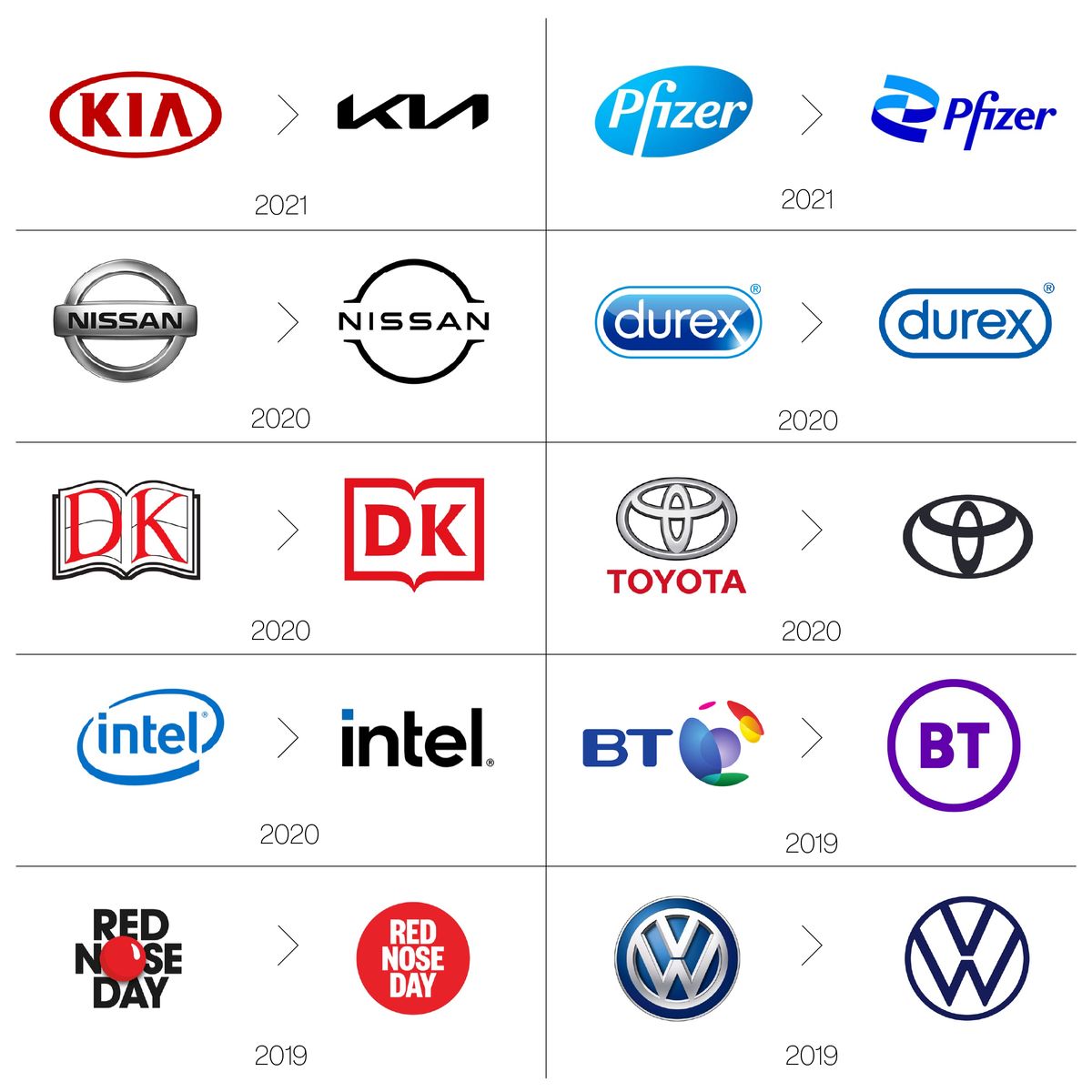 Now the trick is to shrink an entire identity into a tiny digital box. Such pixel pressure usually means returning to the 2D look of old. Of course this 2D look was more or less the norm until computers took over and.

The design inflation spiraled out of control. Anyone who is over filtered and Instagram sunset knows the seductive lure of visual excess and it’s a seduction to which the pros are not immune.

The ability to round corners, drop shadows customized gradients and create complex lighting effects can easily overpower the creative brief and often does so many recently.
Brands represent a return to sobriety after a spasm of software abetted intoxication.

There is also the question of maturity.
Many of our biggest brands were born in a spirit of playful innocence that burst forth from their early branding.

As these companies grew and the stakes rose so their logos were obliged to mature from cartoonish to corporate, flamboyant to flat wacky to bland, illustrating the power of debranding to professionalize.

And then there is fashion company graphics are as susceptible to trends as any other design, as we see in the Stampede of fashions little black dress logos heralded by essan laurant in 2012 and followed by Diane von Furstenberg, Calvin Klein, Berluti, Burberry and Balmain.

Yet the most intriguing element of the deep rounded logo is its potential to become a portal.

One of brothers didn’t just strip back its theatrical golden guilt. It unlocked a world of possibility that increasingly vital to brands that span genres showcase.

For all these reasons, it seems likely that Debranding will be with us for a while, but who knows when the pendulum will swing and the trend revert to detail complexity and personality.

After all, once a critical mass is zagged against the prevailing zig, the margin becomes mainstream. The template flips and the dance begins afresh.

Heading Order One of the easiest accessibility improvements you can make to a website with big impact is adding headings to break up content and using them in  the correct numerical order. When you’re building websites, always use headings in the correct order to...

ChatGPT: New OpenAI text generator is out of this world

The newly trained ChatGPT from Open AI has been released to much fanfare. No doubt you may have seen people on social media posting tests from it, or maybe a youtube video popped up on your feed. Well, AI is here and making a big statement with ChatGPT. What is the...

Mix & Match 478+ premade Blocks & export the final design as .json file. This is not a plugin nor child theme. Nothing to be installed on your site. It's is an online drag & drop tool for you to easily mix & match 478+ premade blocks then simply export...

Subdomains and SEO – Pros and Cons of Subdomains vs Subdirectories

Pros and Cons of Subdomains and Subdirectories in 2022 If you want to manage multiple websites for your business or your clients, one way to achieve subdomains or subdirectories on WordPress is to use WordPress Multisite (formally known as WPMU). This creates a...

How to Design a WordPress Website on Cloud Servers

Introduction Are you looking to create a WordPress website but don't know where to start? If you're feeling overwhelmed, don't worry - we're here to help. In this blog post, we'll walk you through everything you need to know about designing a WordPress website on...