Where it all began

The term “Web 2.0” really took off with the second web boom. After the collapse of the dot-com era, the web began a steady rise in popularity that was much healthier and showed it was capable of being around for a long, long time. The term “Web 2.0” sprouts from the people of O’Reilly. In fact, they wrote an excellent article defining Web 2.0 back in 2005.

Where design fits in

With the rise of the term “Web 2.0” came the rise of a driven creative force inspired to make this new web shiny and new, and they did this quite literally. The direction web design went with the arrival of of the new web was definitively bubblegum. Design consisted of bubblier letters, brighter colors, bigger layouts, and more chrome and reflections than you could shake a stick at. The new trend was a refreshing change from the dull websites of the past, and the design community flourished with a new sense of purpose and passion to create.

By early ’07, these design trends started to over-saturate the web, and the bubblegum look started to become tired. Unfortunately, this is when larger corporations started to jump onto the bandwagon. As is typical in the large corporate world, design becomes a conglomeration of the opinions of too many people, many of which have the power but not the aesthetic sensibilities to be making the right calls. The term “Web 2.0” had become a dangerous marketing buzzword, being spoken by people who don’t really have a solid understanding of what it means to make something Web 2.0.

Rotten Tomatoes is an excellent example of what happens when Web 2.0 aesthetics go wrong. Rotten Tomatoes is a very popular website that is a division of IGN Entertainment, which is owned by the multimedia giant Fox. A site that was once easy to navigate, well laid out, and graphically subtle exploded in a mess of chrome effects and Trebuchet, and I have no doubt there was a committee behind the scenes that’s responsible for the results.

The lack of whitespace on the homepage is probably what stands out as the first offense the new design makes. Upon first arriving at rottentomatoes.com, you’re bombarded with links and ads that make no attempt to give your eyes a resting spot. Whitespace is important in a site as loaded to the brim with content as Rotten Tomatoes. The lack of whitespace is overwhelming to the end-user, which potentially will result in the user cutting their visit to the site shorter than it would have been otherwise. Some additional padding within block elements like the main menu would help substantially. 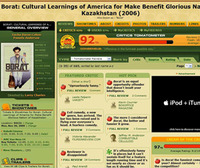 Another big problem is the navigational and layout changes.  To support this, I’ll provide screenshots of the before and the after. To the right you’ll find the prior design, where the movie reviews were found towards the very top of the page with the movie details appearing in the left column. On right side, you found the “Cream of the Crop” reviews. Both the regular reviewers and the Cream of the Crop reviewers’ ratings were displayed clearly on a single page. 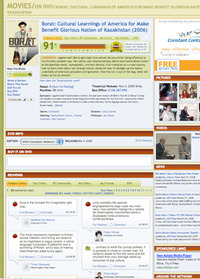 Now let’s move on to the new design. One of the first changes you’ll notice is that the movie details have been moved to the top of the page, instead of the supporting left column. Above the reviews, there are also two sections related to the DVD. These layout changes place far less emphasis on the reviews than previously. They are no longer anywhere to be seen at the top of the page, one must scroll down quite a ways to eventually find them. For a website that found its beginnings as a place to collect a wide range of critical opinions on films, this seems like a huge misstep. In addition to changing the placement of reviews, they also decided to entirely remove the “Cream of the Crop” from this page.  Instead, one must select “Top Critics” to even see what the overall top critic rating is. These layout changes were likely decided for a number of reasons, all of which don’t place the user’s experience first. The most obvious reason for this change is to attack the user with more advertisements than previously.  Each click means another opportunity for money making, at the expense of frustrating the user.

So where do we go from here?

Now, don’t get me wrong, I think the Web 2.0 movement in the design community has had a wonderfully positive impact on inspiring designers to think beyond the assumed constraints of HTML. It’s also placed a new-found emphasis on good design practices, and coding by web standards. Without the buzzwords and the tired trends, a lot can be taken away from the movement, as we hopefully move beyond the necessity to define what we do by a version number.

You Won't Believe How Easy It Is to Generate SEO Content for Your Website Artificial intelligence (AI) has come a long way since its inception in the 1960s. In recent years, AI has been used to create systems that can automatically analyze and interpret data. This...

This article was republished from benefitspro.com Plaintiff’s attorneys have increasingly sued companies alleging their websites fail to comply with the Americans with Disabilities Act (ADA), California Unruh Civil Rights Act, and similar state laws that prohibit...

We wanted to share some exciting news as we move in to 2022. Ameravant will be offering new, top-tier WordPress design and hosting moving forward. We have built up a secure cloud-based WordPress hosting environment, complete with multiple premium ($$) plugins...

How to Ask for Business Reviews

About the author Brian Barwig   Brian is a Local Search Analyst and Account Manager at a digital marketing agency, Sterling Sky. He has been helping clients with local SEO since 2008 and works on a variety of businesses with the Sterling Sky Dream Team. Most...